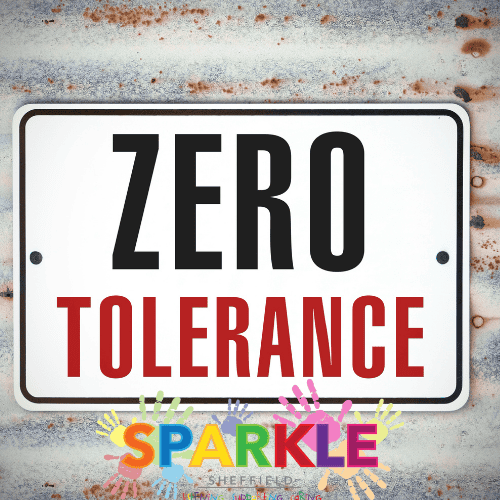 Sparkle Sheffield takes it very seriously if a member of staff or one of its volunteers is treated in an abusive, threatening, disrespectful or violent way.

The Charity enforces a Zero Tolerance strategy for any form of abuse or disrespect against staff members and/or volunteers (going forward will be referred to as ‘staff’).
This states that all staff have a right to carry out their duties without fear of being attacked, discriminated, ill-treated or abused. No member of staff should be required or feel obliged to deal with any service user nor any other, either face to face, over the phone or in correspondence, who is exhibiting demanding, threatening, disrespectful abusive, discriminatory or violent behaviour. In any of these circumstances a member of staff has the right to refuse to continue communications with the service user; and should refer the user to their immediate supervisor.

To successfully provide our services, a mutual respect between all the staff and service users, parents/carers and other stakeholders has to be in place. All of our staff aim to be polite, helpful, and sensitive to individual needs and circumstances. They would respectfully remind service users, parents/carers and other stakeholders that very often staff could be confronted with a multitude of varying and sometimes difficult tasks and situations, all at the same time and that some of these things given the nature of them will necessitate higher priority.
In addition, staff are entitled to rest periods and breaks, as well as a good balance between work and family responsibilities.

The staff understand that service users, parents/carers and other stakeholders do not always act in a reasonable manner due to the personal nature of the support being received and heightened stress being experienced due to their personal experiences. Whilst taking this into consideration when trying to deal with a misunderstanding or complaint., it must be noted that demanding, aggressive, discriminatory or threatening behaviour, be it violent or verbally or physically abusive, will not be tolerated and may result in the instigator and perpetrator of these unacceptable behaviours being removed from the service and, in extreme cases, the Police being contacted.

Threatening behaviour is defined as, but not limited to, threats of violence to members of staff or any other person which is, for example; sexist, racist or homophobic or other discriminatory in nature, including intimidating tone and language, swearing and/or aggressive body language, hectoring and intimidation.

We ask you to treat our staff courteously, respectfully and with dignity at all times. The vast majority of our staff are volunteers and give up their time, whist caring for their own children with additional needs, to support others in similar situations.

This policy will be reiterated on a regular basis, through face to face, written, text messaging, and email communication, as well as through the charity’s newsletters, brochures and website.

Autism Acceptance Week – How Far Can We Go?!